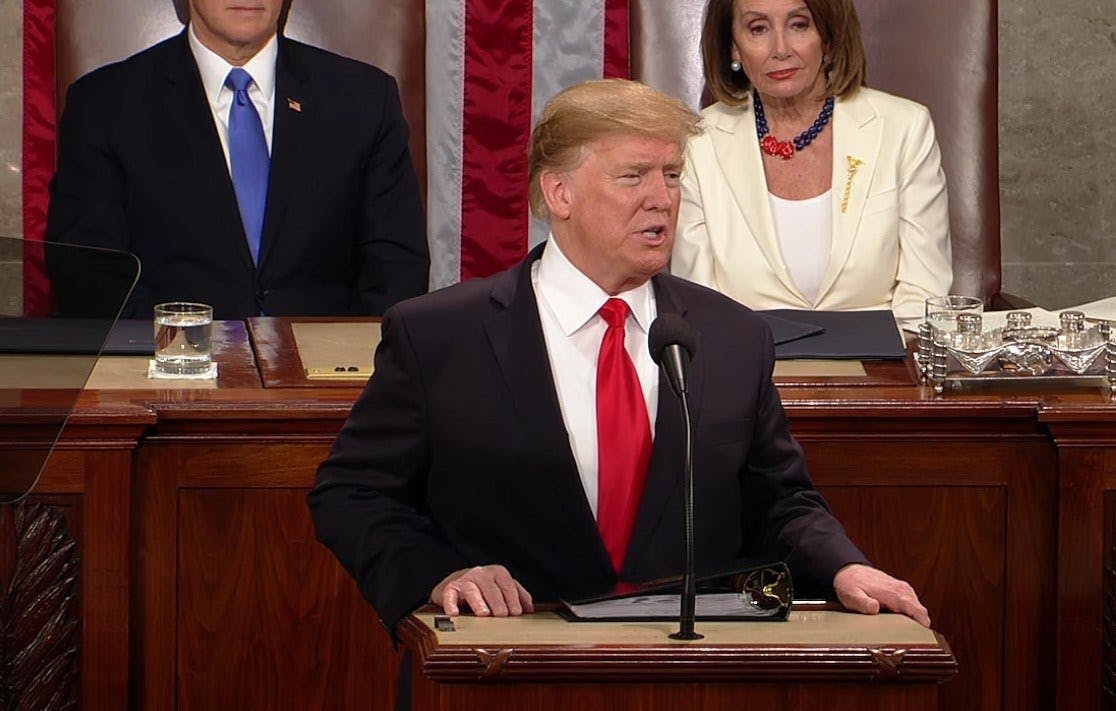 President Donald Trump stressed bipartisan unity in his State of the Union address Tuesday night with a theme of “choosing greatness” in a nearly 90-minute address.

Trump opened his speech saying, “The agenda I will lay out this evening is not a Republican agenda or a Democrat agenda.  It is the agenda of the American people.” He appealed to Congress to act on issues of immigration, prescription drug pricing, trade and infrastructure.

Trump spent much of the early parts of the speech listing the accomplishments of his administration, noting economic progress, the passage of tax cut legislation, criminal justice reform, and the cutting of regulations throughout the U.S. government.

Trump appealed to the newly Democrat-controlled House of Representatives to work with him on legislation, rather than pursue investigations of his administration, saying, “If there is going to be peace and legislation, there cannot be war and investigation. It just doesn’t work that way!”

The president did not shy away from his immigration agenda and the need for a proposed wall along the U.S. southern border. He said, “No issue better illustrates the divide between America’s working class and America’s political class than illegal immigration. Wealthy politicians and donors push for open borders while living their lives behind walls and gates and guards."

Trump told Congress they had 10 days to deliver him a bill that funded his proposed wall, setting the stage for declaring a national emergency if they do not deliver. He stated. “Tonight, I am asking you to defend our very dangerous southern border out of love and devotion to our fellow citizens and to our country,”  adding, “Simply put, walls work and walls save lives. So let’s work together, compromise, and reach a deal that will truly make America safe.”

The president then turned to foreign policy, noting that he will meet North Korean leader Kim Jong Un again in Vietnam later this month, saying, “Much work remains to be done, but my relationship with Kim Jong Un is a good one. And Chairman Kim and I will meet again on Feb. 27 and 28 in Vietnam.”

Trump reiterated his pledge to reduce the U.S. troop presence in Syria and Afghanistan, saying, “As a candidate for president, I pledged a new approach.  Great nations do not fight endless wars.”

The president ended his speech with an appeal to history, memorializing soldiers who fought in World War II, as well as Holocaust survivors.

He said, “Think of this Capitol — think of this very chamber, where lawmakers before you voted to end slavery, to build the railroads and the highways, to defeat fascism, to secure civil rights, to face down an evil empire,” adding, “This is our future — our fate — and our choice to make. I am asking you to choose greatness.”