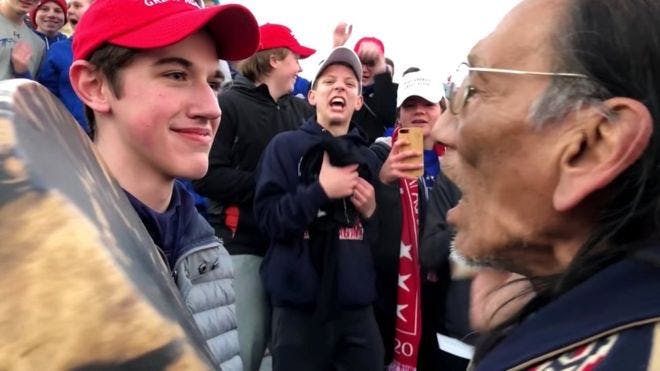 A student who was part of the MAGA-hat wearing crowd who taunted a Native American veteran at a rally claims the older man made his way into their “cheer circle” as a publicity stunt.

The 64-year-old man was singing the American Indian Movement song of unity near Friday's March for Life when he was surrounded by the teens who were allegedly chanting “build that wall, build that wall.”

But one of the students said it was the man who approached them.


In a letter the student said it was veteran Nathan Philips who approached them and 'has a history of claiming racial harassment'.

He said the group did not partake in any physical or verbal abuse and did not chant 'build the wall' at the 64-year-old Omaha native.  The kids were doing school cheers, not bothering anyone.

He posted a video of Philips walking towards them and said it is unfair that his friend who came face to face with the veteran now faces expulsion from school.

The mother of the student standing opposite Philips blamed 'black Muslims' for the confrontation who were 'yelling profanities' at the boys.

The student posted a number video of a group of African-American protesters shouting obscenities and racist abuse at one of the school's black students.


For his part, the man said he felt threatened by the teens including one who just stood in his face while he sang.

“I believed that by remaining motionless and calm I was helping to diffuse the situation...I said a silent prayer that the situation would not get out of hand”.

The media claimed the MAGA Hat Kid was racist for standing motionless and smiling.


"When we arrived, we noticed four African American protestors who were also on the steps of the Lincoln Memorial. I am not sure what they were protesting, and I did not interact with them. I did hear them direct derogatory insults at our school group."

"The protestors said hateful things. They called us "racists," "bigots," "white crackers," "faggots," and "incest kids." They also taunted an African American student from my school by telling him that we would "harvest his organs." I have no idea what that insult means, but it was startling to hear. "

"At no time did I hear any student chant anything other than the school spirit chants. I did not witness or hear any students chant "build that wall" or anything hateful or racist at any time. Assertions to the contrary are simply false. Our chants were loud because we wanted to drown out the hateful comments that were being shouted at us by the protestors.

"The protestor everyone has seen in the video began playing his drum as he waded into the crowd, which parted for him. I did not see anyone try to block his path. He locked eyes with me and approached me, coming within inches of my face. He played his drum the entire time he was in my face.

"I never interacted with this protestor. I did not speak to him. I did not make any hand gestures or other aggressive moves. To be honest, I was startled and confused as to why he had approached me. We had already been yelled at by another group of protestors, and when the second group approached I was worried that a situation was getting out of control where adults were attempting to provoke teenagers.

"I believed that by remaining motionless and calm, I was helping to diffuse the situation. I realized everyone had cameras and that perhaps a group of adults was trying to provoke a group of teenagers into a larger conflict. I said a silent prayer that the situation would not get out of hand.

"During the period of the drumming, a member of the protestor's entourage began yelling at a fellow student that we "stole our land" and that we should "go back to Europe." I heard one of my fellow students begin to respond. I motioned to my classmate and tried to get him to stop engaging with the protestor, as I was still in the mindset that we needed to calm down tensions. "